AQUASTYLE has announced that Touhou Genso Wanderer -Lotus Labyrinth R- and Touhou Double Focus will be releasing on Steam on May 25.

Touhou Genso Wanderer Lotus Labyrinth previously released in 2018 on PS4 and Nintendo Switch but it had been decided to completely update and revamp the game as Lotus Labyrinth R.

AQUASTYLE also has a pending broadcast on May 22nd before the release of Lotus Labyrinth R “reviewing the contents of the game, which has been drastically reborn, as well as the details and prices of the DLC to be distributed.”

Recently, the Touhou Station Twitter account has announced the launch of the Touhou Garakuta Web Magazines English version. These translations are done in collaboration with translation group Kangaeruna, Miyo!

The site launched with an introductory article about the web magazine itself, an introduction to Touhou Project, its games and where to purchase them. The first part of the 10-part ZUN Interview, the Reitaisai Kids’ illustration Contest Interviews from 2019 and a report on Reitaisai 18.

You can visit the new English Touhou Garakute Website here

KLab has announced that they along with DoBaLaGames will be developing a Touhou Fangame for mobile devices (iOS, Android) in the shoot ’em up genre. Its planned to be released worldwide.

Progress on future development and publishing in other distribution areas will be announced when available.

弾幕幻想 (official English title undecided) is a side-scrolling action shooter. Players can fire barrages to defeat enemies, build their characters, and play with various other elements. This game is a spin-off based on the “Touhou Project” created by Team Shanghai Alice through an official creator license.

The game story begins when the peace in Gensokyo is once again disturbed. A strange magical presence is invading Gensokyo and causing the yokai to go berserk and destroy everything. The girls must set out on a journey to discover the heart of this disturbance and save Gensokyo from disaster. 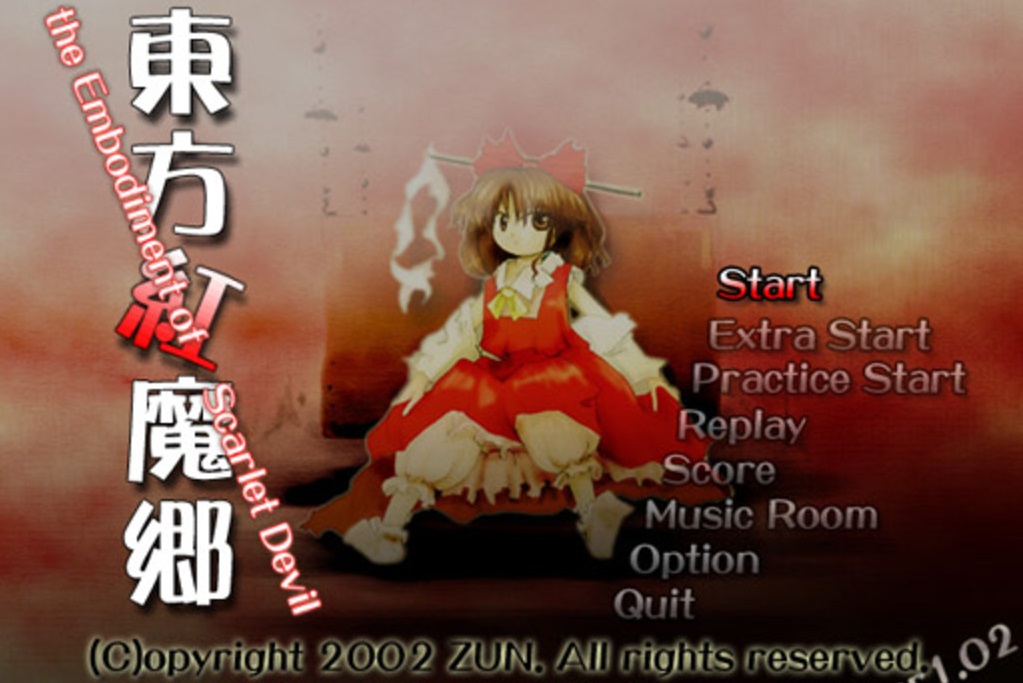 Dataminer @notrevenant who is the Co-Admin of The Cutting Room Floor
(a Wiki Site that covers hidden, changed and cut content from video games)
has discovered yet to be documented Unlock Codes for Touhou 6 Embodiment of Scarlet Devil, Touhou 7 Perfect Cherry Blossom and Touhou 8 Imperishable Night.

Embodiment of Scarlet Devil along with Perfect Cherry Blossom and Imperishable Night features a code to automatically unlock all extra content.

In Touhou 6 on the Extra Stage records screen, hold either Shift or Ctrl and press Home five times, Q two times, and S three times. If done correctly, you’ll hear the 1up sound, and the Extra Stage and all practice stages will be unlocked for both characters and shot types.

In Touhou 7 on the Hard Mode records screen, hold either Shift or Ctrl and press Up three times, D two times, Down two times, and Q three times. If done correctly, you’ll hear the 1up sound, and the Extra and Phantasm Stages and all practice stages will be unlocked for all characters, shot types, and difficulty levels.

In Touhou 8 on the Score Ranking menu, hold either Shift or Ctrl and press Right five times, Left one time, D two times, and Q three times. If done correctly, you’ll hear the 1up sound, and the Extra Stage, all solo characters, and all practice stages and spell cards (including Last Word spell cards) will be unlocked for all characters and difficulty levels. Indie Game publisher Phoenixx has uploaded a new English Trailer for Touhou 15.5 Antinomy of Common Flowers for PS4 and Switch, hinting at a worldwide release. The console version of the game is scheduled to be released April 22.

In a Touhou Station article that included a small Interview with ZUN after Reitaisai 18 concluded, ZUN has confirmed that the full version of Touhou 18: Unconnected Marketeers will be released and distributed on May 4th at the Genso Kagura 5 event.

You can visit the Gensou Kagura homepage here

Furthermore, the trial version of Touhou 18: Unconnected Marketeers that had been released during Reitaisai 18 will be made available on Steam on March 23.

The Publisher Kadokawa has a listing of an upcoming Issue for the official Touhou Magazine “Stranger Creators of Outer World” being the 2021 Spring Volume. Having it listed to be released on March 31 being sold for 1,320 yen.

The listings description is as follows:

The official magazine that brings you the hottest information on Touhou Project!
As a special commemorative issue for the 25th anniversary of Touhou Project, we have developed a large feature that analyzes and introduces various aspects of the works, characters, and music based on the “numbers” related to Touhou Project.
There will also be a special edition of the novel “Yousei Bashi Eika” in collaboration with the Touhou web media “Touhou Garakuta Soushi (Strange Articles of Outer World)”, as well as an article about the collaboration project between Oki Island and Touhou Project.
In addition, the official novel series “Touhou Kourindou (Curiosities of Lotus Asia)” and a wide variety of manga will also be included in this issue.

Strange Creators of Outer World is an official Touhou Project magazine which started running from September 30, 2015. It is published by Kadokawa under its Dengeki Moeoh imprint with full supervision and support by ZUN.

The magazines feature interviews and introductions of doujin creators in all fields of Touhou fandom, beginner-friendly information on the Touhou universe, and a new serialization of Curiosities of Lotus Asia by ZUN.

The official Twitter account of Tasogare Frontier (Twilight Frontier) and General Producer Unabara Iruka have announced that the planned release
of Touhou 17.5 Touhou Gouyoku Ibun has been halted and thus, wont end up being distributed at the upcoming 18th Hakurei Shrine festival
(Reitaisai 18) on March 21.

Due to development reasons, we have decided not to distribute “Touhou Goupon Ibun” at the 18th Hakurei Shrine Festival.
We sincerely apologize for the fact that this happened and that the report was delayed in an attempt to realize the game for distribution.

The release time and means of distribution are being readjusted and will be announced as soon as the details are decided.
I would like to comment on the cancellation via @unabara
I’m sorry for the inconvenience.

I am very sorry for this decision to those who were looking forward to the event from the beginning.
We were also considering making it to the last minute and bringing it in by hand, but I decided we couldnt deliver the product yet, considering the fact that the omission of the contents was expected to leave some concerns about the development and that it would take time to update the game in response after the release.

Due to my own poor performance and a delay in understanding the situation, the decision to cancel the event was made with less than a week to go, which caused a great deal of inconvenience to the participants and people involved in planning the event.

As for the future plans, I will let you know from the official account when there is a decision on the release method and time.
Finally, I would like to apologize again for the inconvenience.

Update: ZUN has also commented on the delay.

We apologize for not being able to distribute it on the day of the event.
But hey, we won’t make you wait for too long before we bring you the most destructive story development like we’ve never seen before and a nostalgic, uncanny vibe that you usually cannot experience in other Touhou works.

I wonder if this is what they say overseas when an indie game is postponed ? (What I said was not a lie.)

Touhou World Cup 2021, the unofficial competetive Touhou scoring and survival event will be broadcasted from March 20 at 15:00 (GMT+8) to May 8 throughout different days.

During this event, players from the 3 groups Japan, China and West will compete against each other in scoring and survival categories all across the mainline Touhou Danmaku games.

The event will be broadcasted in English on the Touhou Replay Showcase Twitch channel. The official Comiket Twitter account has made an announcement that this years Comic Market 99 has been postponed due to “the extension of the State of Emergency Declaration and related government policies”.

The event was to be held from May 2 through 4 this year at the Tokyo Bigh Sight, the usual Comic Market venue.

Regarding the postponed Comic Market 99 schedule, they are aiming to hold it in the winter of 2021, but it is unknown at this moment how the situation regarding the venue usage of Tokyo Big Sight will be by the time.

Meanwhile, the 18th Hakurei Shrine Festival (Reitaisai 18) is still being held on March 21 this year at the Twin Messe Shizuoka​ and the participation admission ticket (that also serves as the events catalogue) are currently being sold.

Twilight Frontier had announced the release of the full version of
Touhou 17.5 Touhou Gouyoku Ibun to be at Reitaisai 18 on March 21.

ZUN had also announced to release a trial version for Touhou 18: Unconnected Marketeers at Reitaisai 18 while initially planned to release the full version in May. It is not yet confirmed whether or not it will be sold through different means or if this will postpone the games release alongside Comiket.

This is a non-professional News Blog about all things Touhou Project. This is run as a hobby with the main goal to provide and spread awareness of Touhou informations for english speaking audiences.